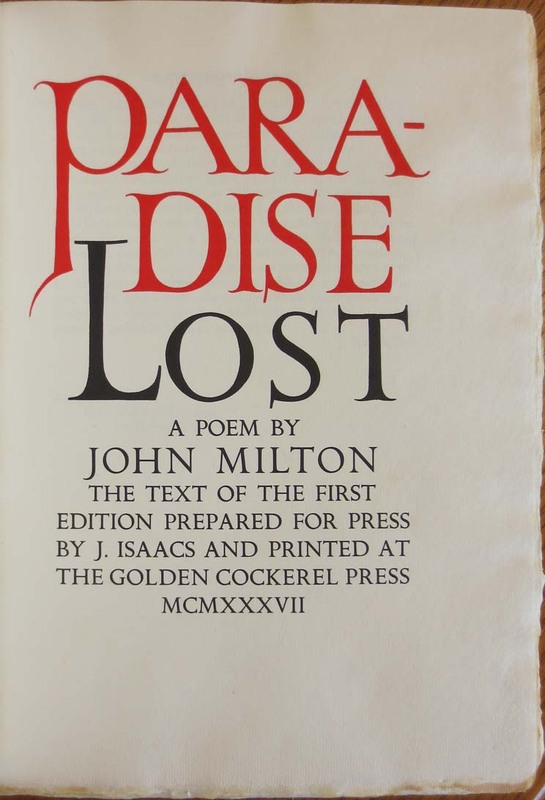 It is not known exactly when John Milton actually wrote his epic poem Paradise Lost, though many scholars guess that it was written in London around 1650-1660. During this time Milton, a staunch anti-royalist, came under heavy attack and even was imprisoned for his support of an English Commonwealth. Having left London in the summer of 1665, the blind Milton sought refuge at Chalfont St. Giles. Two years later, following an outbreak of the plague as well as the Great Fire of 1666 in London, Milton published "the most noticed, most read, most criticized, and finally the most exalted Poem in the English Tongue."

Milton entered into a publishing agreement with printer Samuel Simmons on April 27, 1667. This agreement allowed for the publication and sale of a maximum of 4,500 copies (printed in three impressions of 1,500 each, the maximum number of copies permitted by English law per impression). Upon signing, Simmons paid Milton £5 and paid additional sums of £5 at the completion of each impression.

The first edition was a small quarto which sold for three shillings. The text seems to have been edited with great care, with revisions coming from Milton himself or a close associate. However, the publisher Simmons found sales of the poem to be somewhat sluggish because of the difficulty of the text and the lack of any annotations or textual apparatus. Therefore, Simmons suggested to Milton that he add an argument to each book explaining the plot to the reader in simple terms. The text layout was also changed from Milton's original ten books to twelve by dividing books VII and X into two books each. This imitated the conventional contemporary epic poetry style.

The second edition was published in 1674 by Simmons and included these changes. Milton also helped to revise and edit this edition, the final edition to appear before his death later that year. Simmons followed the second edition with a third edition in 1678 having negotiated a publishing agreement with Milton's widow Elizabeth.

However in 1680, Simmons settled with Elizabeth and paid her £10 for the second and third editions as well as an additional £8 for copyright to the poem. In the meantime, Simmons had already arranged to sell the rights again to bookseller Brabazon Aylmer for £25. Aylmer would not publish an edition of Paradise Lost, as the market was saturated with Simmons' editions, and he in turn sold the copyright to an enterprising young publisher, Jacob Tonson.

Milton's overall reputation at the end of the seventeenth century did not bode well for the sale of his literary works. First it suffered from his political views, and Paradise Lost came under intense literary criticism for not following conventional poetic standards. However, he did have a small, but vocal group of supporters who would later expand his reputation beyond simple admiration.